To share your memory on the wall of Bonnie Thomas, sign in using one of the following options:

To send flowers to the family or plant a tree in memory of Bonnie Sue Thomas, please visit our Heartfelt Sympathies Store.

Receive notifications about information and event scheduling for Bonnie

We encourage you to share your most beloved memories of Bonnie here, so that the family and other loved ones can always see it. You can upload cherished photographs, or share your favorite stories, and can even comment on those shared by others.

Posted Jun 01, 2020 at 05:14pm
You are a very sweet cousin I know you are at peace. You will be missed by so many I'm sure because you were so sweet and kind to everyone. I have never
Heard you raise your voice. HEAVEN GAINED ANOTHER ANGEL. RIP.
BETTY AND CLYDE BLOOMFIELD
Comment Share
Share via:

Posted Jun 01, 2020 at 01:36pm
Aunt Sue,
I will miss you more than words can describe. I don't even know what to write here. It still all seems so hard to believe.
Comment Share
Share via:
HS

Posted Jun 01, 2020 at 01:06pm
Wishing you peace to bring comfort, courage to face the days ahead and loving memories to forever hold in your hearts.

Flowers were purchased for the family of Bonnie Thomas. Send Flowers 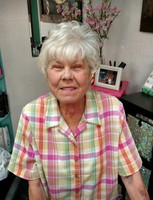