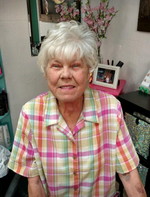 Bonnie Sue (Davenport) Thomas, 76 years, of Peebles, passed away on Friday, May 29, 2020, at her residence.
Bonnie was born on March 13, 1944, in Bandy, Virginia, the daughter of the late Lacy William and Lilly (Roberts) Holbrook. Bonnie worked as a real estate agent and as a home health care aide. She attended the Union Hill Church, in Peebles.
In addition to her parents, Bonnie was preceded in death by both her first husband, Wilbur Davenport, who passed in 1981; and her second husband, Gene Thomas, who passed in 2002. She was also preceded in death by a daughter, Lorraine Schulte; four brothers, Zonnie Holbrook, Lacy Holbrook, Jr., Robert Holbrook, and Sam Holbrook; and two sisters, Augustine Ross and Rita Holbrook.
Bonnie is survived by a son, Bill (Silvia) Davenport, of Winchester; and three daughters, Patricia (Michael) Montgomery, of Peebles; Donna Sue (Ralph) Mullins, of Pikeville, Kentucky; and Sherry (Steve) Stratton, of Peebles. Bonnie also leaves a brother, Eugene (Shari) Holbrook, of Seaman; three sisters, Ina (Sam) Cluxton, of Cherry fork; Wilma Holbrook, of Peebles, and Linda (Dennis) Ward, of Peebles; seven grandchildren; and eight great-grandchildren.
Funeral services will be held at 1:00 PM, on Tuesday, June 2, 2020, at the Wallace-Thompson Funeral Home, in Peebles, Ohio. The ceremony will be officiated by Dennis Ward. Burial will follow in the Evergreen Cemetery.
Family and friends may pay their respects on from 11:00 AM to 1:00 PM, Tuesday, June 2, 2020, prior to the funeral service, at the Wallace-Thompson Funeral Home, in Peebles.
Funeral arrangements are being handled by the Wallace-Thompson Funeral Home. Please visit us at www.wallacethompsonfuneralhomes.com to sign our online guestbook.