To share your memory on the wall of David Cline, sign in using one of the following options:

To plant a memorial tree in honor of David Cline, please visit our Heartfelt Sympathies Store.

We encourage you to share your most beloved memories of David here, so that the family and other loved ones can always see it. You can upload cherished photographs, or share your favorite stories, and can even comment on those shared by others.

Posted Sep 30, 2019 at 08:42am
I only knew David through Kerri and her stories of the things they did. The loss of a brother is so hard. I am so sorry for your loss. Prayers for your family. Sharon Seison and the staff at Price Insurance.
Comment Share
Share via:
MG

Posted Sep 29, 2019 at 11:41pm
To the family and friends of David Cline, our thoughts and prayers are with you. I served on the USS Roanoke with David 27 years ago and remember him like it was yesterday. He will truly be missed. RIP Shipmate, we have the watch now.
Comment Share
Share via:
K

Posted Sep 29, 2019 at 08:36am
I was stunned to read about Dave. My heart aches for his family and close friends. I had the true pleasure of serving with him in the 269th Combat Comm Squadron. We went on multiple deployments...always working hard and playing hard. He had this easy way about him, a huge heart...and a great smile, always cracking a joke and making us all laugh...sometimes we'd groan, because they could be a bit corny...but we always laughed! He had a way of seeing the good in people that is rare these days...and that's what I'll take with me...his smile and that ability to see the good. Prayers for all of us as we say 'see you soon' to one of the good ones. Say hello to the boss for me Dave ❤️ -Laura Harrison
Comment Share
Share via:
HS

Flowers were purchased for the family of David Cline. 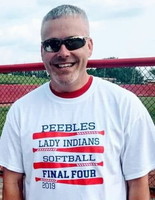