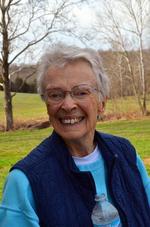 Patricia E Macy, 83 years, of Peebles, passed away on Wednesday, July 3, 2019, at the Adams County Manor, in West Union, Ohio.
Pat was born on February 1, 1936, in Pomeroy, Ohio, the daughter of the late Clifton and Dorothy (Rose) Atkins. She worked as a medical assistant.
In addition to her parents, Pat was preceded in death by her husband, Glen (Jack) Macy, who passed away in 2001. Pat is survived by a son, Ed (Bobbi) Macy, of Batavia; and two daughters, Julie (Gary) Workman, of Peebles; and Ann (Dave) Scott, of Peebles. Patricia’s loss will be mourned by her eight grandchildren and fifteen great grandchildren.
According to Pat’s wishes, she is to be cremated. A memorial service will be planned for a later date.
Funeral arrangements are being handled by the Wallace-Thompson Funeral Home. Please visit us at www.wallacethompsonfuneralhomes.com to sign our online guestbook.