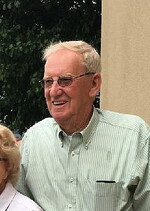 Robert B Hall, 85 years, of Seaman, Ohio, passed away on Sunday, February 14, 2021, at the Bethesda North Hospital, in Cincinnati, Ohio.
Bob was born in Kentucky, on June 4, 1935, the son of the late Robert J and Dora Mae (Moran) Hall. Bob worked as a farmer and a millwright. He was a member of the Millwright Union Local #1519, and the Seaman and Winchester Masonic Lodge #236. Bob was a former Adams County Commissioner. He attended the Mowrystown Church of Christ.
In addition to his parents, Bob was preceded in death by three brothers, Brooks Hall, Bill Hall, and Joe Hall; and by a sister, Linda Rice. He is survived by his wife, Rosemary (Rothwell) Hall, whom he married on October 3, 1958. Bob is also survived by a daughter, Susan (Jon) Hunter, of Hillsboro; a brother, Donnie Hall, of Kentucky; and two sisters, Nancy Barnes, of Sabina; and Ann Shelton, of Peebles. Bob will be missed by his two grandchildren, Bennett and Dylan.
Funeral services for Bob will be held at 1:00 pm, on Monday, February 22, 2021, at the Lewis-Sullivan Funeral Home, in Seaman, Ohio. The ceremony will be officiated by Chris Gobin. Family and friends may pay their respects during visiting hours, on February 22, 2021, from 11:00 until the time of the services, at the Lewis-Sullivan Funeral Home. Masonic services will begin at 12:45. Burial will follow at the Tranquility Cemetery, in Seaman, Ohio.
In lieu of flowers, the family requests that memorial donations be made in Bob’s name to the Mowrystown Church of Christ, 28 West Main Street, Mowrystown, Ohio 45155.
Funeral arrangements are being handled by Lewis-Sullivan Funeral Home. Please visit us at www.wallacethompsonfuneralhomes.com to leave words of comfort for the family in our online guestbook.