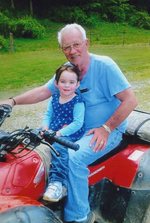 Robert L “Bob” Litreal, 75 years, of Otway, Ohio, passed away on Wednesday, July 15, 2020, at his residence.
Bob was born in Rarden, Ohio, on June 2, 1945, the son of the late Harley and Phyllis Litreal, of Urbana; and Lonnie and Margaret (Thompson) Osburn, of Rarden. After serving in the United States Army, Bob served as an Ohio Highway Patrolman, and he worked at Dayton Walther Foundry, in construction and building work; and as a lifelong farmer. He attended the Rarden Baptist Church and was a member of the Sinking Spring Masonic Lodge #365.
In addition to his parents, Bob was preceded in death by a sister, Suzette Litreal Poe. Bob is survived by his wife, Shay Litreal; his son, Dwayne (April) Litreal, of Texas; and by three daughters, MaryAnn Litreal, and Carla (Keith) Warren, both of Lucasville; and Sandy Williams, of Wheelersburg. Bob also leaves behind a brother, Carl Oberly, of Delaware, Ohio; and a sister, Sue Strickland, of Otway. He will be sadly missed by his ten grandchildren and eight great-grandchildren.
Funeral services, officiated by Zachery Stephens, will be at 4:00 PM, Sunday, July 19, 2020, at the Wallace-Thompson Funeral Home, 119 Rarden Road, Peebles, Ohio. Family and friends may pay their respects from 1:00 PM until time of services on Sunday, July 19, 2020, at the Wallace-Thompson Funeral Home.
Funeral arrangements are being handled by the Wallace-Thompson Funeral Home. Please visit us at www.wallacethompsonfuneralhomes.com to sign our online guestbook.