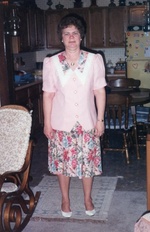 Thelma J Sowards, 81 years, of Peebles, passed away on Monday, July 22, 2019, at the Adams County Manor, in West Union, Ohio.
Thelma was born on August 19, 1937, in Scioto County, Ohio, the daughter of the late Glen and Bessie (Hoffer) Pertuset. Thelma was a member of the Peebles Church of Christ in Christian Union. She spent her life caring for her family and home.
In addition to her parents, Thelma was preceded in death by two brothers and a sister. Thelma is survived by her husband, Claude Sowards, whom she married on June 19, 1956. She also leaves behind three sons, Terry (Robin Speakman) Sowards, of Peebles; Tony (Jennifer) Sowards, of Hillsboro; and Chris (Brandi) Sowards, of Peebles; and two daughters, Betty (Kerry) McElwee, of Sinking Spring; and Brenda (Rick) Tolle, of Peebles. Thelma’s passing will be mourned by her brother, Jim Pertuset, and her sister, Kathryn Storer, both of Peebles; her eleven grandchildren and ten great-grandchildren.
Funeral services will be held at 1:00 PM, Thursday, July 25, 2019, at the Wallace-Thompson Funeral Home, in Peebles, Ohio. Burial will follow at the Washburn Cemetery, in Pike County. The ceremony will be officiated by Phil Fulton and Richard Lloyd.
Family and friends may pay their respects from 6:00 PM until 8:00 PM, Wednesday, July 24, 2019, at the funeral home.
In lieu of flowers, the family requests that memorials be made in Thelma’s honor to the National Breast Cancer Foundation at www.nationalbreastcancer.org or to National Breast Cancer Foundation, PO Box 678572, Dallas, TX 75267-8572.
Funeral arrangements are being handled by the Wallace-Thompson Funeral Home. Please visit us at www.wallacethompsonfuneralhomes.com to sign our online guestbook.