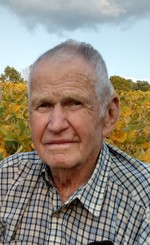 Theron E Shoemaker, 92 years, of Peebles, Ohio, passed away on Wednesday, October 21, 2020, at the Adams County Regional Medical Center, in Seaman, Ohio.
Theron was born in Peebles, Ohio, on July 11, 1928, the son of the late Earl and Daisy (Arey) Shoemaker. Theron worked as a line foreman for REA Electric and as a farmer. He was a member of the Peebles Masonic Lodge #581, and he attended the Peebles Church of Christ.
Theron was preceded in death by his parents; his brother, Richard Shoemaker; and his sister, Alice Mae Grooms. He is survived by his wife of 70 years, Evelyn (DeAtley) Shoemaker, whom he married on August 5, 1950. He also leaves his son, Phillip (Carma) Shoemaker, of Peebles; and his daughter, Valerie (Richard) Swayne, of Peebles. Theron’s passing will be mourned by his four grandchildren, Deborah Swayne, Kara Shearer, Ben (Krystal) Shoemaker, and Whitney (Wes) Newman; and seven great-grandchildren.
Funeral services, officiated by Jason Bohl, will be at the convenience of the family, Thursday, October 22, 2020, at the Wallace-Thompson Funeral Home, in Peebles, Ohio. Burial will follow at the Evergreen Cemetery. A private visitation will be held in the hour before the service on Thursday, October 22, 2020, at the funeral home.
Funeral arrangements are being handled by the Wallace-Thompson Funeral Home. Please visit us at www.wallacethompsonfuneralhomes.com to sign our online guestbook.