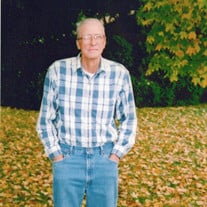 Clifford L Edwards, 93 years of age, of Peebles, Ohio, passed away on Tuesday, September 28, 2021, at the Hospice of Hope Care Center at Kenton Point, in Maysville, Kentucky. Cliff was born in Peebles, Ohio, on February 4, 1928, the son of the late George Herbert and Flora (Shoemaker) Edwards. A lifelong resident of Peebles, Cliff grew up on a small farm near Locust Grove. He attended Locust Grove School where he excelled in playing basketball. Cliff was proud to share that in 1945, his team earned the sectional win and was the runner-up in the district tournament play. He and his wife Betty were married in June 1947, and he began working for Betty's father Nathan Pendell driving trucks hauling stone and lime. In 1969, Cliff took over the family business; he drove trucks for 53 years. Cliff was a member of the Peebles Masonic Lodge #581, which merged with the West Union Masonic Lodge #43; he was a 32nd-degree Mason; as well as a lifetime member of the Scottish Rite Valley of Cincinnati. Cliff served as a Peebles Local School Board member for eight years, as well as a member of the Peebles Fire Department. In addition to his parents, Cliff was preceded in death by his wife of 64 years, Betty (Pendell) Edwards, who passed away on August 13, 2018. He was also preceded in death by his twin sisters, Jeneveve Trout and Mary Lee McCoy. Cliff is survived by his son, Jerry (Jeanie) Edwards, of Peebles; his grandchildren, Marla Sams and Trea Edwards; his great-grandchildren, Rebekah Sams and Alexa Sams; and his sister, Martha Boyd, of Dayton. Cliff will be missed by his special great-niece Annabelle, along with several other nieces and nephews. Cliff was actively involved with his family. Whether it was baseball, motor cross, basketball, golf, hunting, fishing, badminton, skip-bo, or dominoes, Cliff was ready to take part. He was Jerry's little league coach. He liked watching the Cincinnati Reds play baseball and he liked college basketball. He attended many local basketball games. Cliff was never one to put things off and would always readily lend a helping hand. He was our fixer, our go-to, the one we could rely on. He was a friendly, dependable, trusting, likeable, and energetic man. He'll be missed and fondly remembered with reverence, as a legacy and a standard to live by. Visitation has been scheduled for Saturday, October 2, 2021, from 9:00 AM until 11:00 AM at the Wallace-Thompson Funeral Home, in Peebles. Masonic Services will begin at 10:30 AM. Funeral services will immediately follow at 11:00 am, at the Wallace-Thompson Funeral Home, with Larry Anderson officiating. Burial will follow at the Locust Grove Cemetery. Funeral arrangements are being handled by the Wallace-Thompson Funeral Home. Please visit us at www.wallacethompsonfuneralhomes.com to sign our online guestbook.

Clifford L Edwards, 93 years of age, of Peebles, Ohio, passed away on Tuesday, September 28, 2021, at the Hospice of Hope Care Center at Kenton Point, in Maysville, Kentucky. Cliff was born in Peebles, Ohio, on February 4, 1928, the son of... View Obituary & Service Information

The family of Clifford L Edwards created this Life Tributes page to make it easy to share your memories.

Send flowers to the Edwards family.