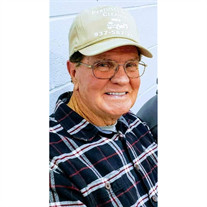 Clyde E Pertuset, 83 years, of Peebles, Ohio, passed away on Friday, March 1, 2019, at the Hospice of Hope Ohio Valley Inpatient Center, in Seaman, Ohio. Clyde was born in Scioto County, Ohio, on January 1, 1936, the son of the late Glen Pertuset and Bessie (Hoffer) Pertuset. Clyde was self-employed as the owner and operator of Pertuset's Septic Service. Clyde was preceded in death by his parents, and an infant daughter, Kimberly Ann. He is survived by his wife Krystal (McCann) Pertuset, whom he married on February 22, 1991. He also leaves behind three sons, Danny (Carolyn) Pertuset, of Peebles; Jimmy (Jody) Pertuset, of West Union; and Jerad (Megan) Raines, of River Heights, Utah; and two daughters, Kathy (David) Pryor, and Thea (Tom) Trantow, both of Peebles. Clyde also leaves behind a brother, Jim Pertuset, of Peebles; and two sisters, Kathryn Storer and Thelma Sowards, both of Peebles. Clyde's passing will be mourned by several nieces and nephews, as well as his eleven grandchildren and six great-grandchildren. Funeral services will be held at 10:00 AM, Wednesday, March 6, 2019, at the Peebles Church of Christ, in Peebles, Ohio. The ceremony will be officiated by Brian Justice and David Pryor. Burial will follow at the Locust Grove Cemetery. Family and friends may pay their respects from 5:00 PM until 8:00 PM Tuesday evening, March 5, 2019, at the Peebles Church of Christ. Memorial donations may be made to the First State Bank, in Peebles, Ohio. Funeral arrangements are being handled by the Wallace-Thompson Funeral Home. Please visit us at www.wallacethompsonfuneralhomes.com to sign our online guestbook.

The family of Clyde E Pertuset created this Life Tributes page to make it easy to share your memories.

Send flowers to the Pertuset family.