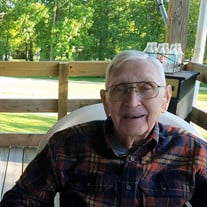 Dale Gordon Chapman, 85 years of age, of Peebles, passed away Wednesday, November 10, 2021, at the Ohio Valley Manor Nursing and Rehabilitation Center, in Ripley, Ohio. Dale was born on January 17, 1936, in Delbarton, West Virginia, the son of the late Roy and Tennessee (Rose) Chapman. Dale was both a United States Navy veteran during the Korean War and a United States Air Force veteran. He worked as a machinist after leaving the military. He attended the Highway 32 Church of Christ. In addition to his parents, Dale was also preceded in death by his son, Shayde Chapman. Dale is survived by his wife, Ethel (Canterbury) Chapman, whom he married on May 1, 1958. He is also survived by his son, Greg (Hope) Chapman, of Aberdeen, Ohio; his two daughters, Rhonda Copley, of West Union; and Sheila Chapman Gelter, of Batavia. Dale will be missed by his seven grandchildren; Missy, Gabriel, Brandon, Daniel, Ashley, Brian, and Morgan; and his nine great-grandchildren. Family and friends may pay their respects during visitation, on Friday, November 12, 2021, from 11:00 am to 1:00 pm, at the Wallace-Thompson Funeral Home, in Peebles, Ohio. Graveside funeral services will be held on Friday, November 12, 2021, at 1:00 pm, at the Winchester Cemetery. The service will be officiated by Marc Curfman. Military graveside services will be provided by the Adams County Honor Guard. Funeral arrangements are being handled by the Wallace-Thompson Funeral Home. Please visit us at www.wallacethompsonfuneralhomes.com to sign our online guestbook.

The family of Dale Gordon Chapman created this Life Tributes page to make it easy to share your memories.

Dale Gordon Chapman, 85 years of age, of Peebles, passed away...

Send flowers to the Chapman family.