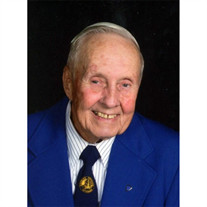 Donald L Mefford, 85 years, of Peebles, Ohio, passed away on Sunday, April 8, 2018, at the Adams County Regional Medical Center, in Seaman, Ohio. Donald was born in Dayton, Ohio, on December 25, 1932, the son of Detmar Mefford and Irma Link Mefford. After his service in the United States Navy, Donald worked as a firefighter. Don was an active member of the Peebles United Methodist Church, as well as the Disabled American Veterans, Chapter 71 of Adams County. He served as a volunteer at the Chillicothe VA Medical Center. He was also a member of the Peebles Lions Club, and the AMVET organization, as well as being a 32nd Degree Mason. Donald was preceded in death by his parents. He is survived by his wife, Shirley Gass Mefford, whom he married on May 7, 1952; a son, Don (Tammy) Mefford, of Colorado; and four daughters, Wanda Mefford, of Florida; Cheryl (H. Daniel) Yeager, of Kettering; Cindy Gillum, of Kettering; and Tina (Scott) Berrisford, of Minnesota. Donald also leaves behind nine grandchildren, sixteen great- grandchildren, and one great, great-grandchild. Don will be dearly missed by his many friends, acquaintances, and church family. Memorial services will be held at 11:00 AM, Saturday, April 14, 2018, at the Peebles United Methodist Church, in Peebles, Ohio. The ceremony will be officiated by Dave Hilgeman. A gathering of family and friends will be held from 10:00 AM until the time of services on Saturday, April 14, 2018, at the church in Peebles. In lieu of flowers, the family requests that memorial donations be made to the Peebles United Methodist Church, P.O. Box 247, Peebles, Ohio 45660. To sign our online guestbook, please visit us at www.wallacethompsonfuneralhomes.com. Saturday, April 14, 2018 10:00 AM - 11:00 AM Saturday, April 14, 2018 11:00 AM - 12:00 PM

The family of Donald L Mefford created this Life Tributes page to make it easy to share your memories.

Send flowers to the Mefford family.