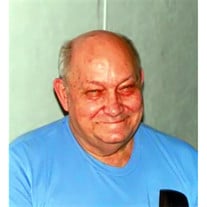 Earl R Fields, 77 years, of Peebles, passed away on Tuesday, October 3, 2017, at the Hospice of Hope Ohio Valley Inpatient Center. Earl was born in West Union, Ohio, on February 21, 1940, the son of the late Estel Fields and Edra Tolle Fields. Earl spent most of his life working as a forklift operator. In addition to his parents, Earl was preceded in death by his wife, Norma Jean Hougland Fields; and by three sisters, Beulah Bowman, Mary Williams, and Hazel Fields. He is survived by his son, Earl Fields, Jr., of Peebles; and a granddaughter, Julie (David) Oney, of Seaman. Earl is also survived by two brothers, Carl (Sandy) Fields, of Wheat Ridge, and Ronald (Sue) Fields, of Michigan. Earl also leaves behind two great-grandchildren, Braxton and Julian. Funeral services will be held at 1:00 PM, Friday, October 6, 2017, at the Wallace-Thompson Funeral Home in Peebles, with burial to follow at the White Oak Cemetery, Latham, with Pastor Dave Hopkins officiating. Family and friends may pay their respects from 11:00 until 1:00 Friday, prior to the funeral service, at the Wallace-Thompson Funeral Home. To sign our online guestbook, please visit us at www.wallacethompsonfuneralhomes.com. Friday, October 06, 2017 11:00 AM - 1:00 PM Friday, October 06, 2017

The family of Earl R Fields created this Life Tributes page to make it easy to share your memories.

Send flowers to the Fields family.