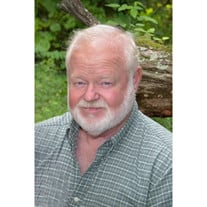 Edward "Sonny" Lykins, Jr., 75, of Peebles, passed away on Sunday, Dec. 3, 2017, at his residence. Sonny was born in Peebles, Ohio, on Sept. 22, 1943, the son of the late Edward Lykins, Sr., and Audrey McFarland Lykins. A small business owner for 30 years, Sonny operated Lykins Welding, where his work as a welder, fabricator and machinist supported businesses in Adams County and beyond. He attended the Peebles Church of Christ and was also a founding member of the Christian Missionary Fellowship. In addition to his parents. Sonny was preceded in death by his sister, Patricia Copas, and a grandson, Silas Gould. He is survived by his wife, Connie Ward Lykins, whom he married on Aug. 5, 1966; and two daughters, Elizabeth (Ummad) Aslam, of Columbus, Ohio, and Rebecca (Garth) Gould, of Sydney, Australia. Sonny is also survived by a sister, Sondra (Norman) Leibreich, of Hillsboro. Sonny will be mourned by his grandchildren, Luke and Finn. Funeral services have been scheduled for Friday, Dec. 8, 2017, at 11 a.m., at the Peebles Church of Christ. The ceremony will be officiated by Bill Christman. Family and friends may pay their respects to the family from 5 p.m. until 8 p.m. Thursday, at the church. In lieu of flowers, the family requests memorial donations be made to the Christian Missionary Fellowship, Attn. Steve Johnson, 627 Paint Road, Winchester, Ohio 45697. To sign our online guestbook, please visit us at www.wallacethompsonfuneralhomes.com. Thursday, December 07, 2017 5:00 PM - 8:00 PM Friday, December 08, 2017 11:00 AM

The family of Edward Lykins created this Life Tributes page to make it easy to share your memories.

Send flowers to the Lykins family.