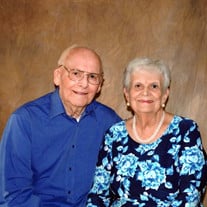 Floyd "Earl" Raines, 97 years of age, of Seaman, Ohio, passed away Sunday, December 19, 2021, at the Monarch Meadows Nursing and Rehabilitation Home, In Seaman. Earl was born on June 3, 1924, in Grundy, Virginia, the son of the late Walker and Belva Raines. He served in the United States Navy from 1943 to 1946. In November of 1945, while home on leave, he married Bettie Zimmerman Raines. He worked at Carroll Gaston gas station for a time, then for several years, he worked at Millstone Knife Factory as a tool and die maker. He loved working on his farm and enjoyed fishing very much. After his retirement, Earl and Bettie spent the next 25 years in Suwannee, Florida, during the winter months. Earl was a member of the Seaman American Legion Post #633 and attended the Bible Baptist Church in West Union, Ohio. In addition to his wife Bettie, Earl is survived by his two sons, Pat (Brenda) Raines, and Gerry (Janet) Raines, four grandchildren and 11 great-grandchildren, as well as two sisters, Darlene Doyle, and Josephine Wilmoth. Earl was preceded in death by a son, Terry Raines; a grandson, Scotty Raines; sisters, Mabel Vance, Ethel Baker, and Hazel Kelley; and brothers, Edgar, Von, Roy, Homer, Leon, and John Raines. Family and friends may pay their respects during visitation, on Wednesday, December 22, 2021, from 6:00 pm to 8:00 pm, at the Lewis-Sullivan Chapel, in Seaman, Ohio. Military services, provided by the Adams County Honor Guard, will begin at 6:30 pm. Funeral services will follow the visitation on Wednesday, December 22, 2021, at 8:00 pm, at the Lewis-Sullivan Chapel, in Seaman, Ohio. Mike Hughes will officiate. In lieu of flowers, the family requests that memorial contributions be made in Earl's name to Gideons International or to the charity of your choice. Funeral arrangements are being handled by the Lewis-Sullivan Funeral Home. Please visit us at www.wallacethompsonfuneralhomes.com to sign our online guestbook.

Floyd "Earl" Raines, 97 years of age, of Seaman, Ohio, passed away Sunday, December 19, 2021, at the Monarch Meadows Nursing and Rehabilitation Home, In Seaman. Earl was born on June 3, 1924, in Grundy, Virginia, the son of the late Walker... View Obituary & Service Information

The family of Floyd "Earl" Raines created this Life Tributes page to make it easy to share your memories.

Send flowers to the Raines family.