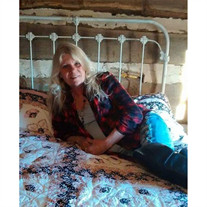 Glenna Roxanne Hackworth, 57 years, of Peebles, Ohio, passed away on Monday, July 15, 2019. Glenna was born on February 20, 1962, in Scottsburg, Indiana, the daughter of Robert and Betsy (Barrett) King. Glenna graduated from Circleville High School and earned her B.A. in Human Services and Counseling. She worked as a waitress, a dietary manager, and a counseling intern. Glenna was preceded in death by her son, Jeremy Hackworth; a grandson, Alexander Scott; and four brothers, Robert King, Anthony King, Jeffrey King, and James King. In addition to her parents, Glenna is survived by her a son, Charles Hackworth, of West Union, Ohio; three stepsons, Brian Vires, of Sardinia; Richard Helton, of Cincinnati; and Brandon Evans, of Hillsboro; three daughters, Jessica (Michael) Finzel, Ruth Barrett, and Lisa Barrett, all of Peebles; and a stepdaughter, Cassie Scott, also of Peebles. Glenna also leaves behind Bennie Barrett, her life partner; and two sisters, Vicki Arendt, of Illinois; and Lisa McIntosh, of Maysville, Kentucky. Her loss will be mourned by her four grandchildren, Roxanne Finzel, Bella Scott, Elissa Scott, and Noah Vires, along with several nieces, nephews, cousins, and a host of friends. No services are scheduled at this time. The family will plan a memorial service for a later date. In lieu of flowers, the family requests that memorial donations be made to the Wallace-Thompson Funeral Home. Funeral arrangements are being handled by the Wallace-Thompson Funeral Home. Please visit us at www.wallacethompsonfuneralhomes.com to sign our online guestbook.

The family of Glenna Roxanne Hackworth created this Life Tributes page to make it easy to share your memories.

Send flowers to the Hackworth family.