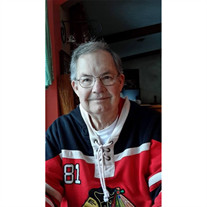 Gordon D. Butler, 83 years of Byron, IL., passed away on March 4, 2019. Gordon was born February 3, 1936 in Dayton, OH., the son of the late Carlos C. and Dorothea (Dunn) Butler. Gordon was a graduate of Fairmont High School in Kettering, OH. He received his Masters Degree from North Central College in Naperville, IL. and served his Country in the U.S. Air Force for 4 years. He worked for 6 years with the Kettering Police Department and moved his family to Naperville, IL. where he went to work for General Motors in management and retired in 1990. After retiring from General Motors, Gordon went to work in Management in Human Resources at Drake Beam Morin and Ingalls Memorial Hospital. Gordon was an AVID train Buff!!! was in many train clubs through the years. He loved and was so proud of his grandkids and great grandkids. Gordon is happily reunited with his furry buddy Waldo! Gordon is survived by his wife of 48 years, Beverly (Askren) Butler; his children, Christopher (Polly) Butler of GA., Keith Butler, FL., Dwight (Dixie) Butler of KY., Leah Perrin of IL., Jennifer Perrin of WI., Jill (Tim) Fregeau of IL.; 12 grandchildren and 8 great grandchildren. Memorial Graveside service will be held 11:00 A.M. Saturday, July 20, 2019 at the Winchester Cemetery. Military Graveside Rites will be conducted by the WPAFB Military Honor Guard and the Adams County Honor Guard. The Wallace-Thompson Funeral Homes, Bradford-Sullivan Chapel in Winchester is in charge of arrangements. To sign our online quest book, please visit us at www.wallacethompsonfuneralhomes.com. Saturday, July 20, 2019 11:00 AM

The family of Gordon D. Butler created this Life Tributes page to make it easy to share your memories.

Send flowers to the Butler family.