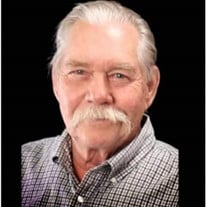 Herbert Thomas "Tom" Wienc, 77 years of age, of Seaman, Ohio, passed away Friday, February 4, 2022, at his residence, surrounded by his beloved family. Tom was born on May 20, 1944, in Chicago, Illinois, the son of the late Herbert and Marion (Simonson) Wienc. Tom dedicated his life to his service in the United States Navy, retiring after 23 years of service as a Navy Chief, with an E-7 rank. Tom belonged to the Hillsboro Eagles Aerie #1161. In addition to his parents, he was preceded in death by two brothers, Mike Wienc and Steve Wienc. Tom is survived by his wife, Rebecca (Hall) Wienc, whom he married on August 8, 1987. He also leaves three daughters, Stacey Sherman, of Apex, North Carolina; Tabitha M Cook, of Southgate, Kentucky; and Samantha D (Cardell) Blevins, of Batavia, Ohio. Tom is survived as well by two brothers, Richard Wienc and Timothy (Leslie) Wienc, both of Illinois; a brother-in-law, Skip (Ginny) Urbanek, also of Illinois; a sister, Patricia Urbanek (Bob Krouldis), of Indiana; and a sister-in-law, Peggy Wienc, also of Indiana; along with many nieces, nephews, and cousins. Tom will be missed by his six grandchildren, Zachary (Kaitlyn), Miranda, Cacey, Evalynn, Sariah, and King. Family and friends may pay their respects and share treasured memories during a gathering of family and friends, on Friday, February 11, 2022, from 2:00 pm to 4:00 pm, at Tom's residence, in Seaman, Ohio. A memorial service celebrating Tom's life, officiated by Joe Strunk, and military rites, provided by the Adams County Honor Guard, will begin at 2:22 pm. The family requests that memorial donations be made in Tom's name to the Adams County Humane Society, P.O. Box 245, West Union, Ohio 45693, or at www.adamscountyanimals.org. Funeral arrangements are being handled by the Lewis-Sullivan Funeral Home. Please visit us at www.wallacethompsonfuneralhomes.com to sign our online guestbook.

Herbert Thomas "Tom" Wienc, 77 years of age, of Seaman, Ohio, passed away Friday, February 4, 2022, at his residence, surrounded by his beloved family. Tom was born on May 20, 1944, in Chicago, Illinois, the son of the late Herbert and Marion... View Obituary & Service Information

The family of Herbert Thomas Wienc created this Life Tributes page to make it easy to share your memories.

Send flowers to the Wienc family.