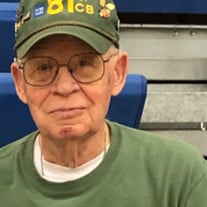 J. Jerald Whitley, 94 years, of West Union, Ohio, passed away on Friday, July 16, 2021, at his residence. J.J. was born in Mowrystown, Ohio, on July 4, 1927, the son of the late Herschel and Imogene (Yochum) Whitley. J.J. worked as a meat cutter. He attended the Cherry Fork Presbyterian Church. J.J. was a member of the Adams County Honor Guard. He belonged to the National Rifle Association and the Veteran of Foreign Wars. J.J. was a World War II veteran, having belonged to the 81st Construction Battalion of the United States Navy, as well as the 25 CB, 133rd CB, 8th CB, and the 23rd CB. In addition to his parents, J.J. was preceded in death by his son John, and his infant son, David, and a sister, Caryl Mae Walker. He is survived by three sons, Tim (Esther) Whitley, of Tennessee; Dan (Becky) Whitley, of Illinois; and Matt Whitley, of West Union; a daughter-in-law, Melissa Whitley, of West Union; two brothers, Richard Whitley, of Milford; and Kenny Whitley, of Mesa, Arizona; and a sister, Marilyn Town, of Toledo. J.J. will be missed by his nine grandchildren and many great-grandchildren. Family and friends may pay their respects on Wednesday, July 21, 2021, from 11:00 am until 12:00 pm, at the Lewis-Sullivan Funeral Home, in Seaman, Ohio. Funeral Services will follow visitation on Wednesday, July 21, 2021, at 12:00 pm, at the Lewis-Sullivan Funeral Home, with Norine Behm officiating. Burial will follow at the Buford Cemetery. Military graveside services will be provided by the Adams County Honor Guard. Funeral arrangements are being handled by the Lewis-Sullivan Funeral Home. Please visit us at www.wallacethompsonfuneralhomes.com to sign our online guestbook.

The family of J Jerald Whitley created this Life Tributes page to make it easy to share your memories.

Send flowers to the Whitley family.