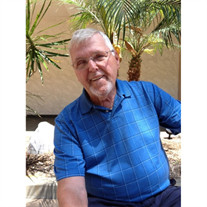 Jack E Downs, 78 years, of Manchester, passed away on Saturday, September 8, 2018, at the Southwest Christian Hospice Center, in Union City, Georgia. Jack was born in Winchester, Ohio, on January 13, 1940, the son of the late Arthur Woodrow and Lena Belle (Jenner) Downs. After serving in the United States Army National Guard Reserves, Jack worked as a truck driver. Jack was a lifelong member of the American Legion, Seaman Post #633 and the Masonic Lodge #589, of Cincinnati. In addition to his parents, Jack was preceded in death by his first wife, Isabelle Daulton Downs, who passed away on April 29, 2000; a sister, Phyllis Downs; and a brother, Ralph (Doris) Downs. Jack is survived by his wife, Mary (Smith) Downs, whom he married on January 8, 2005. He is also survived by two daughters, Carolyn Hochadel (Tony) Doniel, of Georgia; and Jackie (Pat) Drumm, of Mississippi. Jack also leaves behind a brother, Robert (Linda) Downs, of Winchester; and a sister, Ruth Hughes, of Russellville. Jack will be missed by his three grandchildren, Jessica (Stephen) Jennings, Patrick (Jordan) Drumm, and Ryan Hochadel, as well as his four great-grandchildren, Zachary, Tyler, and Chloe Jennings, and Mason Drumm. Also surviving are numerous nieces, nephews, seven stepchildren, 11 step grandchildren, and a step great-grandchild. A service of remembrance for Jack will be held on Friday, September 14, 2018, at 11:00 AM, at the Lewis-Sullivan Funeral Home, in Seaman, Ohio. Tom Claibourne will serve as officiant. Graveside services will follow at Mount Leigh Cemetery, in Seaman. Following the services, lunch will be provided at the Bethlehem Church of Christ. Family and friends may share their respects in a celebration of life on Thursday, September 13, 2018, from 6:00 PM to 8:00 PM, at the Lewis-Sullivan Funeral Home, in Seaman, Ohio. Masonic services will be held at 7:30 pm. The family requests that memorial donations be made in Jack's memory to the Southwest Christian Hospice, 7225 Lester Road, Union City, Georgia 30291. Please visit us at www.wallacethompsonfuneralhomes.com, to sign our online guestbook.

Jack E Downs, 78 years, of Manchester, passed away on Saturday, September 8, 2018, at the Southwest Christian Hospice Center, in Union City, Georgia. Jack was born in Winchester, Ohio, on January 13, 1940, the son of the late Arthur Woodrow... View Obituary & Service Information

The family of Jack E Downs created this Life Tributes page to make it easy to share your memories.

Jack E Downs, 78 years, of Manchester, passed away on Saturday,...

Send flowers to the Downs family.