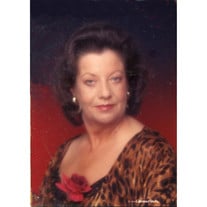 Janet Lee Gaffin, 73 years of age, of Dayton, Ohio, passed away on Sunday, January 10, 2021. Janet was born in Portsmouth, Ohio, on November 10, 1947, the daughter of the late Joe and Norma Jean (Scott) Swayne. Janet took great pride in caring for her home and family. She was a member of the Union Hill Church. In addition to her parents, Janet was preceded in death by her sister, Helen "Sis" Gaffin. She is survived by her husband, Rickey Gaffin, whom she married on January 14, 1967; and her son, Rickey (Ranee) Gaffin, of Peebles. Janet also leaves a brother, Larry (Tonya) Swayne, of Peebles. She will be greatly missed by her granddaughter, Tessa Gaffin. Funeral services for Janet will be held on Wednesday, January 13, 2021, at 1:00 pm, at the Union Hill Church, in Peebles. Judy Van Hoy will officiate the funeral service. Burial will follow at the Locust Grove Cemetery. Family and friends may pay their respects during visiting hours, from 11:00 until the time of the services, at the church. Funeral arrangements are being handled by Wallace-Thompson Funeral Homes. Please visit us at www.wallacethompsonfuneralhomes.com to leave words of comfort for the family in our online guestbook.

The family of Janet Lee Gaffin created this Life Tributes page to make it easy to share your memories.

Send flowers to the Gaffin family.