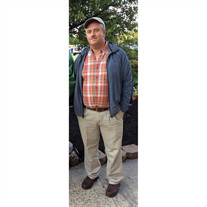 Jerry D "Davey" Jones, Jr., 52 years, of Winchester, passed away on Saturday, April 18, 2020, at his residence. Davey was born in Georgetown, Ohio, on January 14, 1968, the son of Debra (Kingsland) and the late Jerry Jones. Davey was an avid farmer and carpet installer for Carpet Outlet his entire adult life. He was a member of the Brown County Cattlemen's Association and the Brown County Farm Bureau. Davey was preceded in death by his father, Jerry Jones, Sr., and by his grandparents, Amos and Lottie Jones, and Carl and Bonnie Kingsland. He is survived by his wife, Jennifer (Downs) Jones, whom he married on March 14, 1992. He is also survived by his son, Jacob David Jones, and his daughter, Madison Elizabeth Jones, as well as his mother, Debby Jones, all of Winchester. Davey leaves behind two brothers, Kelly (Rhonda) Jones, of Winchester; and Shannon Jones, of West Union; and two sisters, Deanna (James) Curtis, of West Union; and Kristie Jones, of Winchester; as well as several nieces, nephews, aunts, and uncles. Funeral services, officiated by Dan Harrison, will be held at the convenience of the family, with burial following in the Cherry Fork Cemetery. Family members and friends may pay their final respects from 6:00 until 8:00 PM, April 23, 2020, at The Willow Event Center, 7662 Eckmansville Road, Winchester. To conform to social distancing recommendations, only ten visitors at a time will be allowed; and the family will observe the visitation, but will not participate in a receiving line. The family is grateful for everyone's thoughts and prayers, but with social distancing in effect, requests everyone's patience and cooperation. Funeral arrangements are being handled by the Wallace-Thompson Funeral Home, Bradford-Sullivan Chapel. Please visit us at www.wallacethompson funeralhomes.com to sign our online guestbook.

Jerry D "Davey" Jones, Jr., 52 years, of Winchester, passed away on Saturday, April 18, 2020, at his residence. Davey was born in Georgetown, Ohio, on January 14, 1968, the son of Debra (Kingsland) and the late Jerry Jones. Davey was an avid... View Obituary & Service Information

The family of Jerry David Jones, Jr. created this Life Tributes page to make it easy to share your memories.