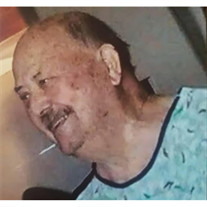 Joe E (Poppy) Parker, 85 years, of Peebles, passed away on Thursday, September 13, 2018, at his residence. Joe was born in Paintsville, Kentucky, on July 14, 1933, the son of the late David and Bessie (Dixon) Parker. Joe's work repairing and restoring furniture brought him hours of pleasure. Joe was a founding member of the Grace Fellowship of Peebles. In addition to his parents, Joe was preceded in death by his son, Brian Parker; a sister, Lily Mae Parker; and a brother, James Parker. Joe is survived by his wife, Sallie (Gieseking) Parker, whom he married on May 12, 1990. He is also survived by six daughters, JoAnn Parker, of Springfield; Teresa Parker, of California; Cynthia Parker, of Florida; Megan Whitis, of Peebles, Tabitha Parker, of Cincinnati; and Tiffany Parker, of Peebles; and a son, Kevin (Marilyn) Parker, of Urbana. Joe also leaves behind three brothers, Dave (Carol) Parker, of Springfield; Ernie Parker, of Fairborn; Roger (Ellen) Parker, of Urbana; a sister-in-law, Jewel Parker, of Miamisburg; and three sisters, Mary Zimmer, of New Carlisle; Mable (Fred) Dawson, of Texas; and Nova (Darrell) Foster, of Springfield. Joe will be missed by his eight grandchildren, as well as his fifteen great-grandchildren. Funeral services for Joe will be held on Tuesday, September 18, 2018, at 1:00 PM, at the Grace Fellowship, in Peebles, Ohio. Dean Kirker and Jerry Huntley will serve as officiants. The family requests that memorial donations be made in Joe's memory to the Grace Fellowship, 25654 State Route 41, Peebles, Ohio 45660, or to the Alzheimer's Association, 225 North Michigan Avenue, Floor 17, Chicago, Illinois 60601. Please visit us at www.wallacethompsonfuneralhomes.com, to sign our online guestbook. Tuesday, September 18, 2018 1:00 PM

Joe E (Poppy) Parker, 85 years, of Peebles, passed away on Thursday, September 13, 2018, at his residence. Joe was born in Paintsville, Kentucky, on July 14, 1933, the son of the late David and Bessie (Dixon) Parker. Joe's work repairing and... View Obituary & Service Information

The family of Joe E Parker created this Life Tributes page to make it easy to share your memories.

Send flowers to the Parker family.