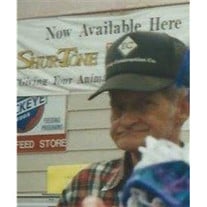 Kenneth Earl Nichols, 83 years, of Peebles, Ohio, passed away on Tuesday, December 8, 2020, at the Ohio State University Wexner Medical Center, in Columbus, Ohio. Kenneth was born in Peebles, Ohio, on April 9, 1937, the son of the late Edgar and Pauline (Barnes) Nichols. Kenneth worked as a truck driver. In addition to his parents, Kenneth was preceded in death by his wife, Sibbie (James) Nichols, who passed on June 11, 2016; and by a son, Sheldon Nichols. He is survived by two sons, Kenny Nichols, Robert Nichols, both of Peebles; and four daughters, Karen (Mike) Lowe, of Lynchburg; Cassie (Tony Rosenberger) Bowser, of Lynchburg; Sharon Nichols, of Columbus; and Tina Copley, of Peebles. Kenneth will be missed by his eight grandchildren and ten great grandchildren. Graveside funeral services will be held at 11:00 am, on Thursday, December 10, 2020, at the Evergreen Cemetery, in Peebles, with Homer Holstead officiating. Funeral arrangements are being handled by the Wallace-Thompson Funeral Home. Please visit us at www.wallacethompsonfuneralhomes.com to sign our online guestbook.

The family of Kenneth Earl Nichols created this Life Tributes page to make it easy to share your memories.

Send flowers to the Nichols family.