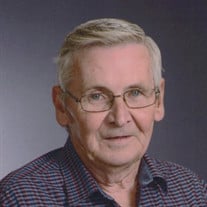 Lafe Aryan Armstrong, 74 of Winchester, Ohio, went home to meet his Savior on Friday, December 3, 2021, surrounded by his family. Lafe was born in Vanceburg, Kentucky, on April 2, 1947, to the late Delbert and Nova Armstrong. Lafe is survived by his loving wife of 52 years, Karen (Barnett) Armstrong, whom he married on February 22, 1969. In addition to his wife, he is survived by their five children, Shannon (Sheryl) Armstrong, Lola (Ray) McNown, Danielle (Aaron) Truesdell, Amy (Blaine) Cole, and Marie (Josh) Young; three sisters, Dama Cook, Lauvon (Terry) Mantle, Debra (Jeff) Katz, one brother, Kelly (Mona) Armstrong. Additionally, he is survived by 12 grandchildren, Trenton, Haley, Jonah and Madison Porterfield, Olan and Miriam Truesdell, Grace, Ava, Ivan and Isaac Cole, and Nora and Charlotte Young. He will also be missed by his large extended family. Lafe faithfully attended services at Bethlehem Church of Christ in Winchester and was well known for his joyful demeanor. He was proud to serve his country during the Vietnam War as a soldier in the United States Army. Lafe owned Armstrong Construction as his most recent career. Previous employment included surveying, hauling milk, tire sales and operating a pay lake. Each of these occupations provided him opportunities to connect with his community, which he greatly enjoyed. He loved his family dearly, attending and hosting family gatherings brought him much happiness. He believed in good stewardship, which was demonstrated in his generosity. Family and friends are invited to a visitation from 6:00 pm to 8:00 pm, on Tuesday, December 7, 2021, at Bethlehem Church of Christ. Funeral service will be held Wednesday, December 8, 2021, at 11:00 am, under the direction of Wallace Thompson Funeral Home at the church. Minister Thomas Claibourne will be officiating. Burial will follow in the Cherry Fork Cemetery. Military graveside honors will be provided by the Adams County Honor Guard. In lieu of flowers, donations may be made to Bethlehem Church of Christ, 505 Bethlehem Road, Winchester, Ohio 45697.

Lafe Aryan Armstrong, 74 of Winchester, Ohio, went home to meet his Savior on Friday, December 3, 2021, surrounded by his family. Lafe was born in Vanceburg, Kentucky, on April 2, 1947, to the late Delbert and Nova Armstrong. Lafe is survived... View Obituary & Service Information

The family of Lafe A Armstrong created this Life Tributes page to make it easy to share your memories.

Send flowers to the Armstrong family.