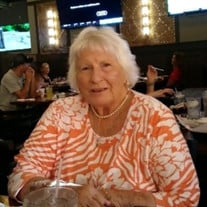 Leona F (Askren) Inskeep, 94 years of age, of Winchester, Ohio, passed away on Wednesday, April 13, 2022, at the Monarch Meadow Nursing Center, in Seaman, Ohio. Leona was born August 10, 1927, in Brown County, Ohio, the daughter of the late Richard "Dick" Herman and Celesta Belle (Wilson) Askren. In addition to her parents, she was preceded in death by her first husband, Wendell Gotherman; a son, Charles Inskeep; and by her brothers, David Askren and Larry Askren; and her sisters, Mary Nell Horn, Naomi Askren, and Frances Fannin. Leona worked as a telephone operator for over 30 years. She belonged to the Winchester Presbyterian Church, as well as the Telephone Pioneers, of Dayton, Ohio; the Elks Club, of Hillsboro; and the Adams County Golf Club. She also served as a driver for the Winchester Township Life Squad; and served on the Winchester Carmel Festival (now the Winchester Homecoming Festival) committee. Leona also owned the Main Street Flower Shop, in Winchester, from 1990 until 1995. Leona is survived by her husband, John W Inskeep, whom she married on March 23, 1958; and by her three sons, Terry (JoAnn) Gotherman, Gary (Shellie) Gotherman, and Timmy (Tangie) Inskeep, all of Winchester; two stepsons, Keith (Lisa) Inskeep, of Minster, Ohio; and Gary R (Tammy) Inskeep, of Texas; and by a daughter, Kimberly (Donald) Bowman, of Winchester; and two stepdaughters, Linda Gayle (Bill) Blevins, of Indiana; and Vickie (Bob) O'Brien, of West Union. Leona also leaves a brother, Charles (Virginia) Askren, of Lynchburg; and four sisters, Wilma (Tom) Breeze, of Winchester; Beverly Butler, of Illinois; Bonnie (Gary McClellan) Harover, of West Union; and Cheri Ayers, of West Carrollton, Ohio. Leona will be missed by her eight grandchildren and thirteen great-grandchildren. Family and friends may pay their respects during visitation on Saturday, April 16, 2022, from 10:00 am to 1:00 pm, at the Lewis-Sullivan Funeral Home, in Seaman, Ohio. Funeral services will be held following visitation on Saturday, April 16, 2022, at 1:00 pm, at the Lewis-Sullivan Funeral Home, in Seaman, Ohio. Barbara Jean Havens and John Robson will officiate the service. Burial will follow in the Winchester Cemetery. The family would like to extend its thanks to the Winchester Presbyterian Church family and many other dear friends and family who have helped and supported our family in this difficult time, with a special thank you to both ministers, Barbara Jean Havens and John Robson. Funeral arrangements are being handled by the Lewis-Sullivan Funeral Home. Please visit us at www.wallacethompsonfuneralhomes.com to sign our online guestbook.

The family of Leona F Inskeep created this Life Tributes page to make it easy to share your memories.

Send flowers to the Inskeep family.