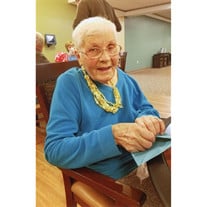 Loretta Porter, 92 years, of Winchester, passed away on Friday, November 16, 2018, at the Monarch Meadows Nursing and Rehabilitation Center, in Seaman, Ohio. Loretta was born on January 27, 1926, in Stonecoal, West Virginia, the daughter of the late Serpell Rouse Keesee and Ethel Lee (Nunn) Keesee. Loretta, a homemaker, was a member of the Mt. Calvary Presbyterian Church, and the Mt. Calvary Busy Bees. She also belonged to the Winchester American Legion Auxiliary, the Southern Ohio Horseshoe Association, and the Sunset Bowling League. In addition to her parents, Loretta was preceded in death by her husband, Thomas G. Porter, who passed away on November 2, 1990. Loretta was also preceded in death by two daughters, Diana Porter, of West Union; and Jeanette Rhoades, of Hillsboro; as well as three brothers, Rouse Keesee, James Keesee, and Robert Keesee; and two sisters, Imogene Keesee and Elizabeth Keesee. Loretta is survived by three daughters, Joyce Porter, of Winchester; Patsy Roberts, of Winchester; and Janice (Donald) McCarty, of West Union. Loretta also leaves behind her brother, Donald Keesee, of San Antonia, Texas. Loretta will be missed by her 14 grandchildren and 23 great-grandchildren, as well as several nieces, nephews, and cousins. Funeral services will be held at 1:00 PM, on Wednesday, November 21, 2018, at the Mt. Calvary Community Church, in Winchester, Ohio. The ceremony will be officiated by Rodney Tumbleson and Daniel McCarty. Burial will follow in the Calvary Cemetery. Family and friends may pay their respects from 6:00 PM to 8:00 PM, on Tuesday, November 20, 2018, at the Bradford-Sullivan Funeral Home, in Winchester. In lieu of flowers, the family requests that donations be made in Loretta's memory to either the Hospice of Hope, in Mt. Orab, or to the Monarch Meadows Patient Activities Fund. Funeral arrangements are being handled by Bradford-Sullivan Funeral Home. Please visit us at www.wallacethompsonfuneralhomes.com to sign our online guestbook. Tuesday, November 20, 2018 6:00 PM - 8:00 PM Wednesday, November 21, 2018 1:00 PM

Loretta Porter, 92 years, of Winchester, passed away on Friday, November 16, 2018, at the Monarch Meadows Nursing and Rehabilitation Center, in Seaman, Ohio. Loretta was born on January 27, 1926, in Stonecoal, West Virginia, the daughter of... View Obituary & Service Information

The family of Loretta Porter created this Life Tributes page to make it easy to share your memories.

Loretta Porter, 92 years, of Winchester, passed away on Friday,...

Send flowers to the Porter family.