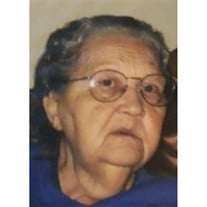 Martha Parsons, 84 years, of Peebles, Ohio, passed away Thursday, December 19, 2019, at the Eagle Creek Nursing Center, in West Union, Ohio, after an extended illness. Martha was born in Haymond, Kentucky, on August 13, 1935, to the late William and Rena (Madden) Collins. She married Joseph Parsons on December 24, 1954. Martha took pride in caring for her home and family. In addition to her parents, Martha was preceded in death by her husband, Joseph Parsons, who passed on May 31, 1974; and by one daughter, Jamima Margaret Parsons. Martha was also preceded by eight brothers, Grover Collins, Luther Collins, Arthur Collins, Buddy Collins, John Henry Collins, Billy Ray Collins, Ernest Banks and Charlie Banks; and by two sisters, Marie Moore and Esther Lucas. Martha leaves behind four daughters, Cathy (Bob) Penny, and Jeannie (Gary) Richter, both of Peebles; Sandy (Jerry) Powell, of Hillsboro; and Cindy (Artie) Gill, of West Union; two sons, Joe (Sandie) Parsons, of Martinsville, Ohio; and Tom (Michelle) Parsons, of Peebles. She also leaves behind a sister, Barbara Collins, of Franklin; and a brother, Frankie Collins, of Kentucky. Martha will be missed by her thirteen grandchildren and fourteen great-grandchildren. Funeral services will be held Sunday, December 22, 2019, at 2:00 PM, at the Wallace-Thompson Funeral Home, in Peebles, Ohio, with Richard Williams officiating. Friends and family may pay their respects during visiting hours on Sunday, from 1:00 PM until 2:00 PM, at the funeral home. Graveside services will be held on Monday, December 23, at the Sturgill Cemetery, in Eolia, Kentucky, at 11:00 AM. Funeral arrangements are being handled by the Wallace-Thompson Funeral Home. Please visit us at www.wallacethompsonfuneralhomes.com to sign our online guestbook.

Martha Parsons, 84 years, of Peebles, Ohio, passed away Thursday, December 19, 2019, at the Eagle Creek Nursing Center, in West Union, Ohio, after an extended illness. Martha was born in Haymond, Kentucky, on August 13, 1935, to the late William... View Obituary & Service Information

The family of Martha Parsons created this Life Tributes page to make it easy to share your memories.

Send flowers to the Parsons family.