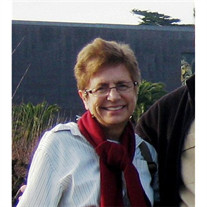 Mary Katherine Kelley of Monrovia, California, died on Jan. 20, 2019. Born on June 28, 1942, in Winchester, Ohio, and known to most as Kathy, she was raised in Peebles, Ohio by her parents, John and Dolores Leshy. Kathy was valedictorian of her high school class and graduated Phi Beta Kappa from Ohio Wesleyan University in Delaware, Ohio in 1964. There she was a member of the four-student team that trounced five different colleges in successive weeks on the popular TV quiz show, College Bowl, and retired undefeated. She went on to earn a Master's Degree in Medical Science from Harvard, specializing in electron microscopy of the argentaffin cells of the mouse stomach. While there she met and married her husband of 44 years, Jonathan Kelley, M.D. They had one child, Sarah Kelley. She later studied law, graduating in the top 10% of her class at George Washington University Law School, taking her third year at Stanford Law School in Palo Alto, CA after a family move out west in 1976. Until 2002, Kathy lived in Los Altos, California, practicing law with her close friend Barbara Roupe. During her years in Los Altos, Kathy was a dedicated volunteer, serving on the board of the San Jose chapter of the YWCA, where she took the lead role in devising and executing a plan to build the $15 million Villa Nueva project, completed in 1993, which provided housing and related facilities for indigent women and their children. In 2002, following Jonathan's retirement, Kathy moved to Los Angeles in order to be closer to her daughter Sarah, and granddaughter Winnie Rose Chavira. There she was a member of the board of the Sierra Madre Community Foundation. Throughout her life, Kathy enjoyed extensive worldwide travels with her family, throughout the Middle East (including two trips to Iran), as well as Africa, China, Central and South America as well as Europe. She had a brilliant mind, was fluent in her knowledge of ancient civilizations, the Bible, the Koran, and other important texts, and was able to recite Shakespeare sonnets and quote literary works in German. She was a devoted mother and grandmother, and though her marriage to Jonathan Kelley ended in 2011, they parted without rancor. Kathy leaves her daughter Sarah Kelley and Sarah's companion Peter Hall; her cherished granddaughter Winnie; her sister DeDe Leshy and DeDe's children Katie and Nick Treuer; her brother John Leshy and his partner Peggy Karp; her nephew Alec Leshy and his mother Helen Sandalls; her former husband Jonathan and his wife Gloria Laino; along with extended family across the United States. She never forgot her beginnings and chose to be buried near her grandparents, with whom she was always very close, in Locust Grove, just outside of Peebles, Ohio. Kathy valued peace over division, love over hate, and generosity in all things. She made a difference in the lives of many but lived modestly and believed firmly in the importance of humility. We will miss her terribly. The family will host a memorial gathering open to all at 1:30 p.m. on Saturday, Feb. 2 at the Wallace-Thompson Funeral Home in Peebles, followed by interment in Locust Grove Cemetery. In lieu of flowers, a contribution may be made in her name to Ohio Wesleyan University.

Mary Katherine Kelley of Monrovia, California, died on Jan. 20, 2019. Born on June 28, 1942, in Winchester, Ohio, and known to most as Kathy, she was raised in Peebles, Ohio by her parents, John and Dolores Leshy. Kathy was valedictorian of... View Obituary & Service Information

The family of Mary Katherine Kelley created this Life Tributes page to make it easy to share your memories.

Send flowers to the Kelley family.