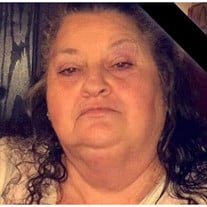 Monday Fisher, 59 years, of Peebles, Ohio, passed away Wednesday, November 13, 2019, at the Adams County Regional Medical Center, Seaman, Ohio. Monday was born in West Union, on January 11, 1960, to the late Joe and Georgia (Payne) Brooks. She took pride in caring for her home and family. In addition to her parents, Monday was preceded in death by a sister, Lydia Gail Phillips, and by her brother-in-law, Donald Siders. Monday leaves behind her husband, Jeffrey Fisher, whom she married on February 14, 1986. She also leaves behind two sons, Josh Renchen, of Peebles; and Paul (Erica) Fisher, of Xenia; as well as three daughters, Katie Renchen, of Sardinia; Amber Renchen, of Okinawa, Japan; Skylar Renchen, of Peebles; and a step daughter, Laura Fisher, of Xenia. She is also survived by four sisters, Brenda Siders, of Sugar Tree Ridge, Ohio; Linda (Dwight) Smith, of Satsuma, Florida; Mary (Ruben) Rodriquez, of Austin, Texas; and Janet (Jeffrey) Fair, of Hillsboro; and two brothers, Joe Brooks, of Fairfax; and Jack (Angela) Brooks, of Middletown, Ohio; as well as a brother-in-law, Arnold Phillips, of Seaman. Monday will be missed by her 8 grandchildren, Reagan, Ridge, Randalyn, Brooklyn, Tucker, Nathaniel, Tristan, and Cody. Funeral services will be held Saturday, November 23, 2019, at 12:00 PM, at the Wallace-Thompson Funeral Home, with Mike Farrell officiating. Friends and family may pay their respects during visiting hours on Saturday, beginning at 10:00 AM until the service time, at the funeral home. Memorial contributions may be made to Katie Renchen, 53 Indian Drive, Lake Waynoka, Ohio 45171. Funeral arrangements are being handled by the Wallace-Thompson Funeral Home. Please visit us at www.wallacethompsonfuneralhomes.com to sign our online guestbook.

The family of Monday J Fisher created this Life Tributes page to make it easy to share your memories.

Send flowers to the Fisher family.