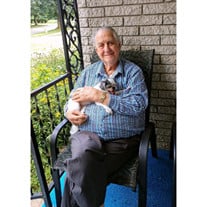 Orval "Carl" Thomas, 85 years, of Peebles, Ohio, passed away on Monday, October 12, 2020, at the Crestwood Ridge Nursing Center, in Hillsboro, Ohio. Carl was born in the Jacksonville community of Peebles, Ohio, on January 17, 1935, the son of the late Chester and Eunice (Swearingen) Thomas. Carl served in the United States Army. After leaving the military, Carl worked for General Motors as a foreman in the paint division. He was a member of the Calvary Baptist Church of Ypsilanti, Michigan, and the Gidions International. In addition to his parents, Carl was preceded in death by his wife, Joanne (Blythe) Thomas, who passed in April, 2018. He was also preceded by two brothers, Neil Thomas and David Thomas; and a sister, Ruth Ann Cluxton. Carl is survived by two sisters, Kay (Russell) Gaffin, of West Union; and Lynne (Kevin) Newman, of Peebles; and two sisters-in-law, Rita Thomas and Phyllis Powell, both of Peebles. Carl's passing will be mourned by the son of his heart, Dwight Sheetz. Funeral services, officiated by Dave Hilgeman, will be at 2:00 PM, Saturday, October 17, 2020, at the Wallace-Thompson Funeral Home, in Peebles, Ohio. Burial will follow at the Jacksonville (Jacktown) Cemetery. Military graveside services will be provided by the Adams County Honor Guard. Family and friends may pay their respects from 12:00 PM until 2:00 PM on Saturday, October 17, 2020, at the funeral home. In lieu of flowers, the family requests that memorial donations be made in Carl's name to either the Adams County Humane Society or the Gideons International. Donations to the Humane Society may be made online at https://www.adamscountyanimals.org/donate or by mail to HSAC, PO Box 245, West Union, OH 45693. Donations to the Gideons may be made online at https://www.gideons.org/donate or by mail to The Gideons International Processing Center, P.O. Box 97251, Washington, DC 20090-7251, or by phone at 1.866.382.4253. Funeral arrangements are being handled by the Wallace-Thompson Funeral Home. Please visit us at www.wallacethompsonfuneralhomes.com to sign our online guestbook.

Orval "Carl" Thomas, 85 years, of Peebles, Ohio, passed away on Monday, October 12, 2020, at the Crestwood Ridge Nursing Center, in Hillsboro, Ohio. Carl was born in the Jacksonville community of Peebles, Ohio, on January 17, 1935, the son of... View Obituary & Service Information

The family of Orval "Carl" Thomas created this Life Tributes page to make it easy to share your memories.

Send flowers to the Thomas family.