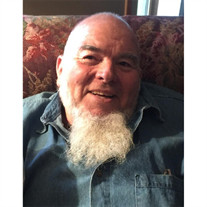 Orvil "Ed" E Lane, Sr., 76 years, of Peebles, Ohio, passed away on Saturday, April 14, 2018, at his home. Ed was born in Charleston, West Virginia, on December 16, 1941, the son of the late Joseph and Nellie (Meadows) Lane. After serving in the United States Air Force, Ed worked in the maintenance department at General Electric. He attended the Peebles Church of the Nazarene. Ed was preceded in death by his parents. He is survived by his wife, Wilma Galloway Lane, whom he married on November 20, 1961. He is survived by five sons, Orvil (Janet) Lane, Jr., of Peebles; Darrell (Cheryl) Lane, of Rarden; David Lane, of Peebles; Michael Lane, of West Union; and Dennis Lane, of Peebles. Ed is also survived by four daughters, Lisa Conti, of Greenfield; Michelle Rowland, of Greenfield; Laura (Tim) Applegate, of Peebles; and Lisa Lane, of Peebles. He also leaves behind three sisters, Josephine Reed, of Cincinnati; Brenda Smith, of Xenia; and Patty Lane, also of Xenia. Ed's passing will be mourned by his fifteen grandchildren, and ten great-grandchildren, as well as by his many friends and acquaintances. Funeral services will be held at 11:00 AM, Thursday, April 19, 2018, at the Wallace-Thompson Funeral Home, in Peebles, Ohio. The ceremony will be officiated by Bob King and Jason Koch. Burial will follow at the Antioch Cemetery. Military rites will be provided by the Adams County Honor Guard. Family and friends may pay their respects from 5:00 PM until 8:00 PM, Wednesday, April 18, 2018, at the funeral home in Peebles. In lieu of flowers, the family requests that memorial donations be made to the Peebles Church of Nazarene Youth Fund, 95 Vine Street, Peebles, Ohio 45660. To sign our online guestbook, please visit us at www.wallacethompsonfuneralhomes.com. Wednesday, April 18, 2018 5:00 PM - 8:00 PM Thursday, April 19, 2018 11:00 AM

The family of Orvil E Lane created this Life Tributes page to make it easy to share your memories.

Send flowers to the Lane family.