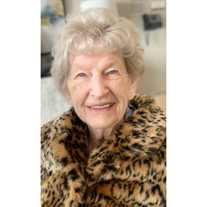 Patricia Ann Sears, 85 years of age, of Myrtle Beach, South Carolina, formerly of Peebles, Ohio, passed away on Saturday, March 13, 2021, at the Autumn Care of Cornelius Nursing and Rehabilitation Center, in Cornelius, North Carolina. Patricia was born in the Dunkinsville community of Peebles, Ohio, on April 20, 1935, the daughter of the late William and Opal Butts. Patricia was a retired elementary teacher. She attended the Peebles United Methodist Church until she moved to South Carolina. In addition to her parents, Patricia was preceded in death by her first husband, Lewis Dean Wallace; and her second husband, Curtis Sears. She was also preceded in death by her son, Lewis David Wallace; and by Nell Newman, who was like a mother to Patricia. Patricia is survived by two daughters, Barbara June (Carey) Graham, of Myrtle Beach, South Carolina; and Nancy Wallace Couser, of Sinking Spring; as well as a sister, Dorothy Chaney, of Seaman; and two grandchildren, Maynell Wallace and Nicholas Couser. She will be missed by her puppy, Sunday. Graveside funeral services for Patricia will be held at 11:00 am, on Saturday, March 20, 2021, at the West Union IOOF Cemetery. The ceremony will be officiated by Greg Seaman. Family and friends may pay their respects during visiting hours on Saturday, March 20, 2021, from 9:00 am until the time of the service, at the Wallace-Thompson Funeral Home. Burial will follow at the West Union IOOF Cemetery. Funeral arrangements are being handled by Wallace-Thompson Funeral Home. Please visit us at www.wallacethompsonfuneralhomes.com to leave words of comfort for the family in our online guestbook.

The family of Patricia Ann Sears created this Life Tributes page to make it easy to share your memories.

Send flowers to the Sears family.