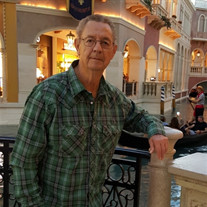 Raymond Junior Ward, 80 years of age, of Peebles, Ohio, passed away Saturday, June 4, at the Hospice of Dayton. Raymond was born on September 14, 1941, in Adams County, Ohio, the son of the late John and Bessie Faye (Shanks) Ward. Until his retirement, Raymond was employed by General Motors for over 30 years. He enjoyed card shoots, fishing, boating, mushroom hunting, gambling, and many other activities. He belonged to the IUECWA Local #755, of Dayton. He was a proud graduate of Franklin High School Class of 1961. In addition to his parents, Raymond was preceded in death by his wife of 50 years, Judith Carol (Boyd) Ward, who passed away on October 11, 2014; his daughter, Tara Ward; and his brother James Ward. He is survived by three children, Karen Holden, of Fayetteville; Chad (Cathy) Ward, of Kettering; and Travis (Rhonda) Ward, of Piketon. Raymond also leaves four brothers, Keith Ward, Tom Ward, Dennis Ward, and Jerry Ward; and four sisters, Shirley Dixon, Linda Purdue, Judy Kay Van Hoy, and Joyce McCain. Raymond will be missed by his seven grandchildren, Bobby (Cory) Price, Tamara Dalton, Tristan Ward, Brock Ward, David Johnson, Kaitlyn Hoefler, and Cheyenne Young; his twelve great-grandchildren; and a host of dear friends. Family and friends may pay their respects during visitation on Thursday, June 9, 2022, from 6:00 pm to 8:00 pm, at the Wallace-Thompson Funeral Home, in Peebles, Ohio. Funeral services will be held on Friday, June 10, 2022, at 11:00 am, at the Union Hill Community Church, in Peebles, Ohio. Burial will follow at the Locust Grove Cemetery, in Peebles. In lieu of flowers, the family requests that memorial donations be made in Raymond's name to the Hospice of Dayton, online at https://www.hospiceofdayton.org/donations, or by mail to 324 Wilmington Avenue, Dayton, Ohio 45420. Funeral arrangements are being handled by the Wallace-Thompson Funeral Home. Please visit us at www.wallacethompsonfuneralhomes.com to sign our online guestbook.

Raymond Junior Ward, 80 years of age, of Peebles, Ohio, passed away Saturday, June 4, at the Hospice of Dayton. Raymond was born on September 14, 1941, in Adams County, Ohio, the son of the late John and Bessie Faye (Shanks) Ward. Until his... View Obituary & Service Information

The family of Raymond Junior Ward created this Life Tributes page to make it easy to share your memories.

Send flowers to the Ward family.