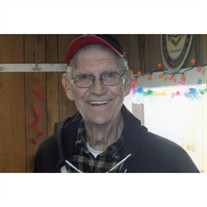 Robert "Jack" Leon Outram, 88 years, of Peebles, passed away on Friday, July 20, 2018, at the Hospice of Hope Ohio Valley Inpatient Center, in Seaman, Ohio. Jack was born in the Franklin Township Community of Peebles, on September 22, 1929, the son of Robert C and Agnes (Chrisman) Outram. After graduating from Franklin High School in 1947, Jack worked for 30 years at Delco Products, Kettering, Ohio. After his retirement, Jack became a bus driver, working for Ohio Valley School District, for 18 years. In his spare time, Jack loved farming. Jack was an active member of the Louisville Community Church and the Louisville Grange #2660. In addition to his parents, Jack was preceded in death by his daughter, Teresa Shiveley, and his son-in-law, Randy Shiveley. He was also preceded by six sisters-in-law and five brothers-in-law. Jack is survived by his wife, Betty Savage Outram, whom he married on September 27, 1959; a daughter, Tara (Ronald) Purdin, of Winchester, Ohio; a half-brother, Jobe Outram, of Yellow Springs, Ohio; and a half-sister, Mary Dean, of Urbana, Ohio; as well as his four grandchildren, Russell, Richard, Steven, and Sandra (Brandon); and two great-grandchildren, Elizabeth and Weston. Jack also leaves behind four brothers-in-law, Bill (Nancy) Savage, Charles (Carol) Savage, Jerry Savage, and John (Jeanie) Savage; and a sister-in-law, Jean Savage; as well as a favorite niece, Alison, and nephew, Mark; several cousins, nieces, nephews, and many dear friends. Funeral services will be held at 1:00 PM Thursday, July 26, at the Wallace-Thompson Funeral Home. The services will be officiated by Michael Wiseman and Marlyn Davis. Burial will follow in the Locust Grove Cemetery. Friends and family may pay their respects from 11:00 AM to 1:00 PM, prior to the funeral services, on Thursday, at the funeral home. In lieu of flowers, the family requests that memorial donations be made to either the Hospice of Hope Program, or to the Louisville Community Church Building Fund, P.O. Box 369, Peebles, Ohio, 45660. The family wishes to thank everyone for their prayers and support. Please visit us at www.wallacethompsonfuneralhomes.com, to sign our online guestbook. Thursday, July 26, 2018 11:00 AM - 1:00 PM Thursday, July 26, 2018 1:00 PM

Robert "Jack" Leon Outram, 88 years, of Peebles, passed away on Friday, July 20, 2018, at the Hospice of Hope Ohio Valley Inpatient Center, in Seaman, Ohio. Jack was born in the Franklin Township Community of Peebles, on September 22, 1929,... View Obituary & Service Information

The family of Robert L Outram created this Life Tributes page to make it easy to share your memories.

Send flowers to the Outram family.