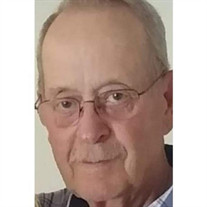 Roger Lee Fitzpatrick, 79 years of age, of Washington Court House, passed away on Tuesday, November 30, 2021, at the Mercy Health Clermont Hospital, in Batavia, Ohio. Roger was born on August 15, 1942, in Rarden, Ohio, the son of the late Elmer... View Obituary & Service Information

The family of Roger Lee Fitzpatrick created this Life Tributes page to make it easy to share your memories.

Send flowers to the Fitzpatrick family.