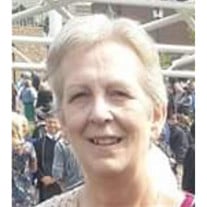 Sarah Little, 59 years, of Peebles, Ohio, passed away on Wednesday, April 11, 2018, at the Clermont Mercy Hospital, Batavia, Ohio. Sarah was born in Adams County, Ohio, on August 29, 1958, the daughter of John and Olivia Wamsley Hawn. Sarah was preceded in death by her father. She is survived by her husband, Johnny Little, of Peebles, whom she married on December 22, 1979. Sarah also leaves behind a son, John Little, of Peebles; and three daughters, Susanna Kidder, of Peebles; Felicia (Carl) Hurd, of Seaman; and Christa (Micheal) Wright, of Wooster. Sarah is also survived by her mother, Olivia Hawn, of Peebles; a brother, Rex Hawn, of Peebles, and a sister, Racheal Johnson, of Cincinnati. Sarah will be missed by her three grandchildren. According to Sarah's wishes, she is to be cremated. A memorial service is being planned for a later date. To sign our online guestbook, please visit us at www.wallacethompsonfuneralhomes.com.

The family of Sarah Little created this Life Tributes page to make it easy to share your memories.

Sarah Little, 59 years, of Peebles, Ohio, passed away on Wednesday,...

Send flowers to the Little family.