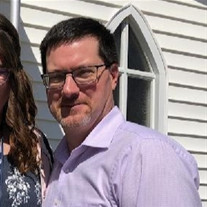 Scott Howard Campbell, 48 years of age, of Rarden, Ohio, passed away Thursday, April 21, 2022, at the Southern Ohio Medical Center, in Portsmouth, Ohio. Scott was born on July 19, 1973, in Portsmouth, Ohio, the son of Emma (Pertuset) and the late Howard Campbell. He was employed as the Chief Deputy Recorder for the Scioto County Recorder's Office. Scott was a very dedicated member of the Henley Baptist Church and also attended the Rarden Community Church. One of his favorite things was singing in church with his mom and special sister Cindy. He served as the president of the Northwest Band Boosters and was a former coach for the T-Ball and softball teams. Scott was preceded in death by his father, Howard Campbell, his brother, Dwight Campbell, and by three treasures in heaven. He is survived by his wife, Becky (Cooper) Campbell, whom he married on July 15, 1995; his daughter, Katie Campbell, who was his prayed-for blessing from God; and his mother, Emma Campbell, of McDermott. He also leaves four brothers, David (Donna) Campbell, of West Portsmouth; Terry (Karin) Campbell, of Texas; Danny (Debbie) Campbell, of Lucasville; and Mark (Brenda) Campbell, of McDermott; as well as two sisters, Nancy (Brian) James, of Franklin Furnace; and Alice (Curt) Carver, of Lucasville; and several nieces and nephews. Scott will be missed by his faithful four-legged companion, Ruby Sue. Family and friends may pay their respects during visitation on Monday, April 25, 2022, from 5:00 pm to 8:00 pm, at the Northwest High School Gymnasium, in McDermott, Ohio. Funeral services will be held on Tuesday, April 26, 2022, at 11:00 am, at the Henley Baptist Church, in McDermott, Ohio. Burial will follow at the Garvin Cemetery, in McDermott. In lieu of flowers, the family requests that memorial donations be made in Scott's name to the Northwest Band, to continue to support all the band members who Scott claimed as his own kids. Funeral arrangements are being handled by the Wallace-Thompson Funeral Home. Please visit us at www.wallacethompsonfuneralhomes.com to sign our online guestbook.

Scott Howard Campbell, 48 years of age, of Rarden, Ohio, passed away Thursday, April 21, 2022, at the Southern Ohio Medical Center, in Portsmouth, Ohio. Scott was born on July 19, 1973, in Portsmouth, Ohio, the son of Emma (Pertuset) and the... View Obituary & Service Information

The family of Scott H Campbell created this Life Tributes page to make it easy to share your memories.

Send flowers to the Campbell family.