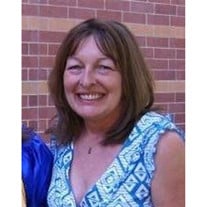 Shelly Seaman, 54 years, of Peebles, passed away Wednesday, October 25, 2017, at the Hospice of Hope Ohio Valley Inpatient Center, in Seaman, Ohio. Shelly was born in Chillicothe, Ohio, on January 9, 1963, the daughter of Robert Dean Swayne and the late Shirley Thompson Swayne. In addition to her mother, she is preceded in death by her sister, Carole Swayne O'Connor. Shelly is survived by her three children, Kelsey Seaman, of Chicago, Illinois, Krista Seaman, of Peebles, and Anthony Seaman, of Columbus, Ohio. Shelly is also survived by her father, Robert Dean Swayne, of Peebles; three sisters, Deana Swayne, Cynthia (Jerry) Pratt, and Kim McCann, all of Peebles; two brothers, Roger Swayne, of Hillsboro, and Richard (Valerie) Swayne, of Peebles, and her former husband, Dwight Seaman, of Peebles, as well as her brother-in-law, Bob O'Connor, of Florida. Shelly will be missed by her many cousins, nieces, nephews, and many close, dear friends. A memorial service will be held at 3:00 PM on Sunday, October 29, 2017, at the Wallace-Thompson Funeral Home, in Peebles, with Greg Seaman officiating. Friends and Family may call at the Funeral Home from 1:00 until the time of service on Sunday, October 29, 2017, at the Funeral Home. To sign our online guest book, visit us at www.wallacethompsonfuneralhomes.com Sunday, October 29, 2017 1:00 PM - 3:00 PM Sunday, October 29, 2017 3:00 PM

The family of Shelly Renee Seaman created this Life Tributes page to make it easy to share your memories.

Send flowers to the Seaman family.