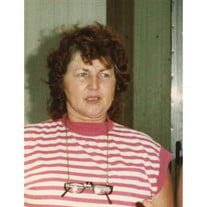 Violet "Louise" Brookover, 82 years, of Hillsboro, Ohio, formerly of Peebles, passed away on Sunday, October 4, 2020, at the Crestwood Nursing Center, in Hillsboro. Louise was born in Adams County, Ohio, on April 10, 1938, the daughter of the... View Obituary & Service Information

The family of Violet "Louise" Brookover created this Life Tributes page to make it easy to share your memories.

Send flowers to the Brookover family.