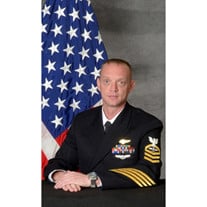 Chief Petty Officer Whaylon G Crago, 39 years, of Oklahoma City, Oklahoma, formerly of Peebles, Ohio, passed away on Monday, November 9, 2020, at his residence. Whaylon was born in Columbus, Ohio, on July 18, 1981, the son of Tamra Sexton-Sprinkle and the late Gregory Crago. After his high school graduation, Whaylon enlisted in the U.S. Navy, which became his lifelong career. Whaylon was preceded in death by his father. He is survived by his wife, Amanda (Anderson) Crago, whom he married on December 2, 2000; and his two sons, Gage Crago and Chase Crago, both at home. He also leaves two brothers, Dustyn Crago, of Peebles; and Jamie Choate, of Columbus; and four sisters, Misty (Jerry) Toller, of Peebles; Schivaun Crothers, of Montana; Amber Church, of Texas; and Kelly Clem, of Columbus; as well as his mother, Tamra (Matt) Sexton-Sprinkle, of Montana. Whaylon will be missed by his extended family, including many nieces, nephews, and cousins, including his best friend Eugene Cody, II; and many friends; his military family; and the members of his squadron. Chief Crago, a native of Peebles, Ohio, enlisted in the United States Navy on August 30, 2000. After completing boot camp at Recruit Training Command Great Lakes, he attended Aviation Electrician's Mate "A" School in Pensacola, FL. After completion of "A" School, he reported to Naval Air Station Lemoore, CA Strike Fighter Squadron ONE TWO FIVE (VFA-125). While attached to VFA-125 Chief Crago deployed with the USS Constellation (CV-64) in support of Operation Southern Watch. Following his initial tour there, he reported to NAS Sigonella, Sicily as a P-3 Orion maintenance technician. From there he transferred to Naval Aircrew Candidate School in Pensacola, FL and then reported to Fleet Air Reconnaissance Squadron SEVEN (VQ-7) for initial fleet training as an E-6B Flight Engineer (FE). Upon completion of his initial FE training, he reported to Fleet Air Reconnaissance Squadron FOUR (VQ-4) where he qualified as a Naval Aircrewman, E-6B Flight Engineer, NATOPS Instructor, Collateral Duty Inspector and Safe-for-Flight. He then transferred back to Fleet Air Reconnaissance Squadron SEVEN (VQ-7) for instructor duty where he served as the E-6B NATOPS Evaluator and Operations Leading Petty Officer where he qualified as a Master Training Specialist. After instructor duty, he reported to Fleet Air Reconnaissance Squadron THREE (VQ-3) where he served as Aviation Electrician's Workcenter Leading Petty Officer, Maintenance Control Department Leading Petty Officer and Operations Leading Chief Petty Officer. He then transferred back to Fleet Air Reconnaissance Squadron SEVEN (VQ-7) for a second instructor tour where he served as the Operations Leading Chief Petty Officer, Master Training Specialist qualifier and mentor. Chief Crago accumulated 3,873 hours in the Mighty E-6B Mercury. He is qualified as a Naval Aircrew Warfare Specialist, Enlisted Aviation Warfare Specialist, and Master Training Specialist. His awards include the Air Medal (Strike/Flight Award), Navy and Marine Corps Achievement Medal (7 awards), and multiple unit and campaign awards. Funeral services will be held at 1:00 pm, on Tuesday, November 24, 2020, at the Wallace-Thompson Funeral Home. The ceremony will be officiated by Dave Hopkins. Friends and family may pay their respects from 10:00 am until 1:00 pm, prior to the funeral services, on Tuesday, November 24, 2020, at the funeral home. Burial will follow in the Evergreen Cemetery, Peebles, Ohio. Funeral arrangements are being handled by the Wallace-Thompson Funeral Home. Please visit us at www.wallacethompsonfuneralhomes.com to sign our online guestbook.

The family of Whaylon Gregory Crago created this Life Tributes page to make it easy to share your memories.

Send flowers to the Crago family.