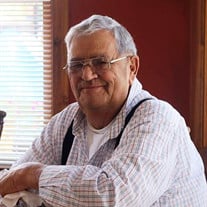 William "Bill" Joseph Adams, 86 years of age, of Peebles, Ohio, passed away on Saturday, October 23, 2021, at the Christ Hospital, in Cincinnati, Ohio. Bill was born in West Union, Ohio, on January 3, 1935, the son of the late Elbert Adams and Hettie (Sipe) Adams Young, along with his second father, Thomas Lee Young. After serving in the United States Army during the Korean conflict, Bill worked as a lineman for AEP. He belonged to the Sardinia Masonic Lodge #254 and the Seaman American Legion Post #633. Bill attended the Louden Community Church. Bill was preceded in death by his wife, Marilyn (Fisher) Adams, who passed on November 23, 2013; and by two brothers, Wayne Adams and Eugene Young. He is survived by a son, Rusty Adams, of Peebles; and two daughters, Mary (Steve) Haag, of Hillsboro; and Michelle Adams, of Peebles. He also leaves two brothers, Burt Young of West Union; and Mack Young, of Tucson, Arizona. Bill will be missed by his four grandchildren, Tyler, Courtney, Emily, and Grace; and his great-grandchild, Saylor Jayne. Private funeral services for Bill will be held at the convenience of the family on Thursday, October 28, 2021, at the Lewis-Sullivan Funeral Home, in Seaman, Ohio. Tommy Adams will officiate the ceremony. A Masonic Service will also be observed. Burial will follow in the Freeland Hollow Cemetery, in West Union. The family is planning a celebration of life for all of Bill's family and friends, to be held at a later date. In lieu of flowers, the family requests that donations be made in Bill's memory to the Louden Community Church. Donations may be sent to Sonia Truman, 4759 Carr Road, Hillsboro, Ohio 45133. Funeral arrangements are being handled by the Wallace-Thompson Funeral Home. Please visit us at www.wallacethompsonfuneralhomes.com to sign our online guestbook.

William "Bill" Joseph Adams, 86 years of age, of Peebles, Ohio, passed away on Saturday, October 23, 2021, at the Christ Hospital, in Cincinnati, Ohio. Bill was born in West Union, Ohio, on January 3, 1935, the son of the late Elbert Adams... View Obituary & Service Information

The family of William Joseph Adams created this Life Tributes page to make it easy to share your memories.

Send flowers to the Adams family.